You are here: Home / Speaking / The Power of Role Plays in Adult ESL

A giant voice roared out of the young woman many never even noticed was in the classroom.  She gestured as if she were teaching a class on how to gesture.  She moved with the definition of stage presence.  Was this the same shy, quiet student who literally couldn’t bring herself to say, “Boo!” when we did a Halloween activity?
I probably should have scraped my jaw off the floor, but the floor was covered—we were all amazed and enthralled.  Even her partner stared almost bug-eyed at her as Mariam theatrically exited the room and then re-entered, now half her size with her eyes to the floor, and perched precariously at her desk.  WHO WAS THAT?!

You know how there are some moments you just never forget?  This was one of them.  But this wasn’t a reminder to me about never underestimating my students—nope… 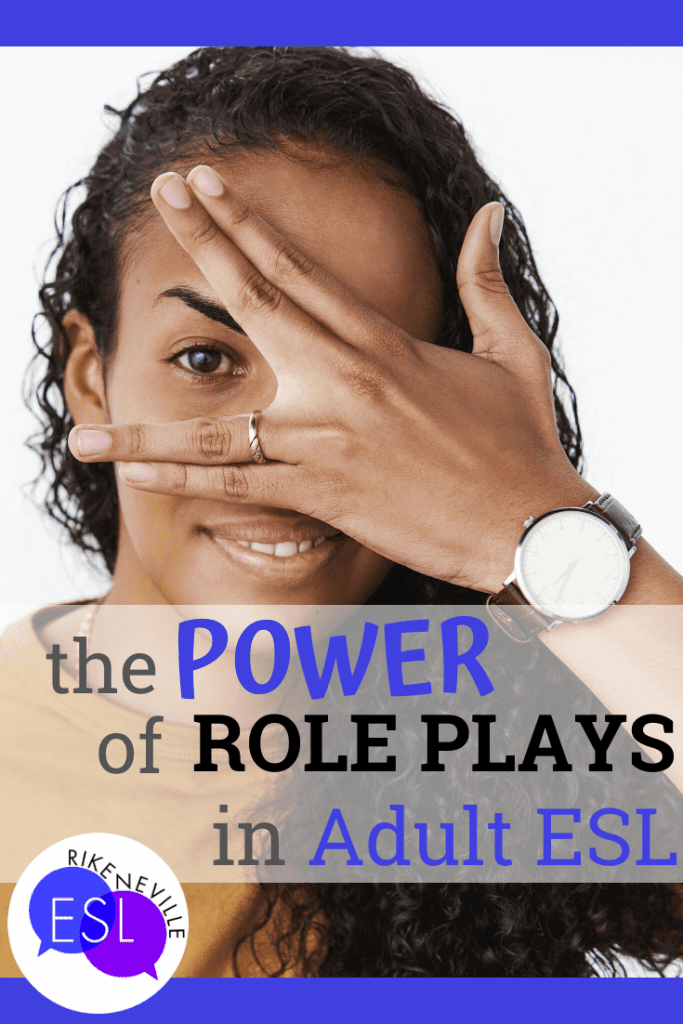 This was about the power of role plays.

Considering that most Americans fear public speaking more than they fear death, I think we can empathize with international students who freeze to their seats and barely mumble when they have to speak in a foreign language with all eyes on them.

I sometimes felt like getting my shy ones to speak was akin to pulling teeth from a squirming earthworm—not an easy task indeed!

But role plays?  Role-plays have almost always been different.  Once students understand that the audience is watching characters and not them, they loosen up a bit.

Sure, you’ll still have some who remain stiff and closemouthed. The secret is to assign them a character who is supposed to be stiff and awkward—they’ll play the part perfectly naturally and honestly earn the applause.  Once they survive that (and for them, it FEELS LIKE surviving), the next role play is a bit easier.

They give students a chance to practice authentic English within a themed framework.  Give them a topic that pertains to their life and watch how engrossed they become with getting the right vocabulary word, saying it with not just the correct pronunciation, but in the most appropriate manner.

Students who don’t bother with vocabulary lists will suddenly be memorizing and using relevant words.  Students who memorize those lists but never use any of the words will find or make situations in which they can use them.

Using words in context helps imprint the words on our students’ minds!

Best of all?  While those who teach in Intensive English Programs must focus heavily on test prep, we are still teaching students who need survival English.  Role plays give students the tools they need to stand on their own feet and not rely so heavily on the translation provided by friends or spouses.

The safe environment we provide in our classrooms allows our students to manipulate the English they know and the English they are learning in real-world scenarios—making it easier to tackle the same situations once outside the classroom.

English is not just a test.  It’s life.

I invite you to try out a free roleplay resource about neighbors—a topic sure to apply to every single adult student.  Just click on the image below to subscribe, and it’s yours!

Oh, and Mariam?  I found out later that her brother was an actor in Saudi Arabia.  Despite being from a very conservative part of a very conservative country, acting was in her blood. When she had the chance to throw off her culture’s mantle and be someone else, she did so with gusto!

Previous Post: « Teaching ESL Grammar When You’re a Newbie
Next Post: How to Cultivate Insightful Discussion Questions for ESL Students »