You are here: Home / Teaching Tips / Bad Study Habits: How to Effectively Crush Them 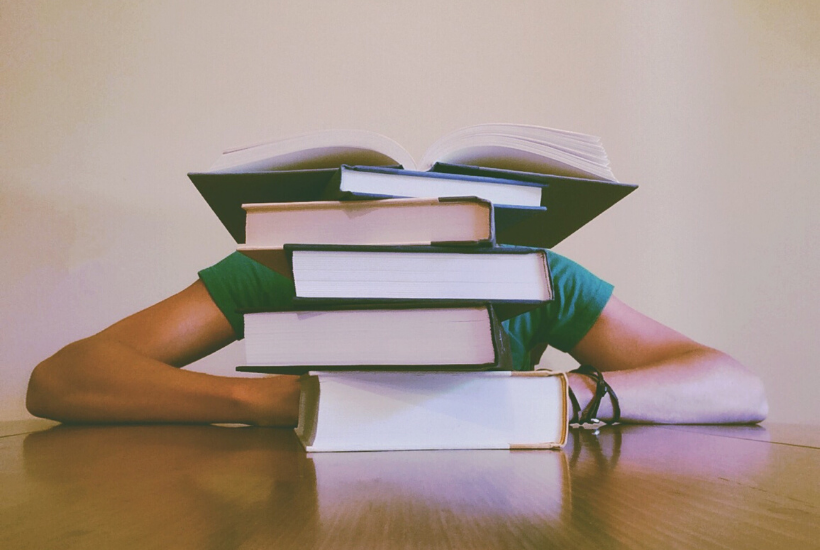 I blinked in disbelief as I looked at the mostly blank paper with seemingly random words shoved into sentence-like structure and then at the student who embodied both defiance and remorse at the same time.

The WRONG QUESTION about Study Habits

Even as I asked it, I wondered why I bothered. Obviously, “Faisal” had not studied, or he would have been able to demonstrate an understanding of the material. However, even though I had given him the options to write out definitions in his own words, write sentences using the words with context clues, or do either activity orally, he protested that the assignment was “too hard.”  With five words making up the entirety of the assignment, I had all sorts of sarcastic comments ping-ponging through my head.

“Did you study the vocabulary words?” 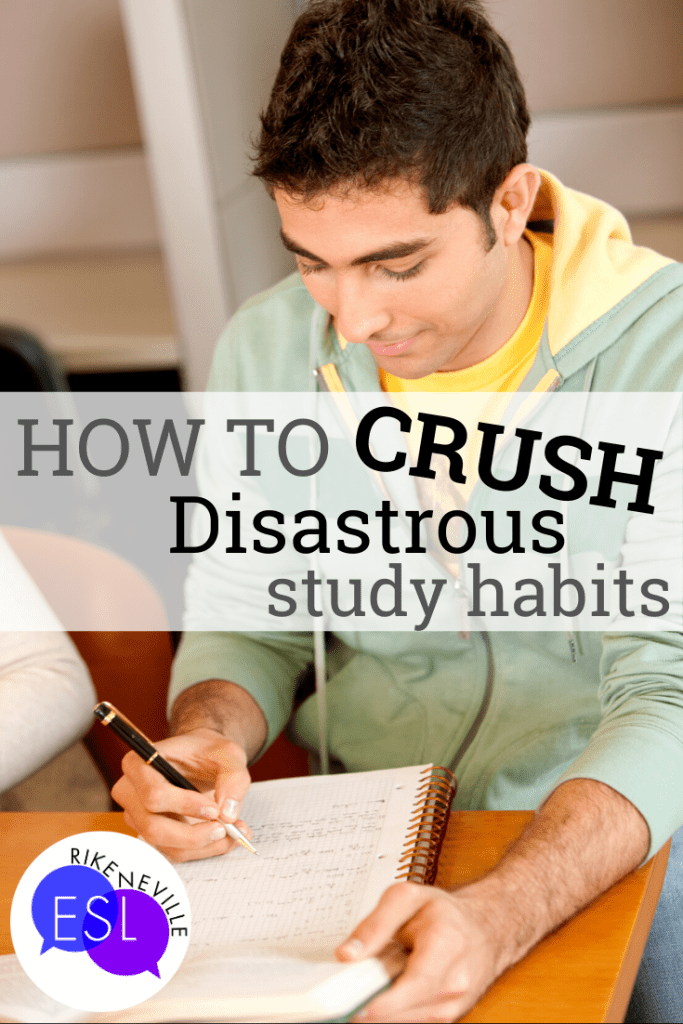 The thing is, he sounded sincere. He LOOKED sincere.

“How much time did you spend studying?”

Find out what they ARE doing.

Even as I said it, I questioned why it mattered how much time was spent studying.  I realized that I was asking the WRONG question, and when I asked another question, which I’ll get to in a moment, I could pinpoint the problem.

As it turns about, he had read the definitions numerous times. Then he had used an app to translate. (He hadn’t even had to type the words; he scanned them with his phone, and Arabic appeared, as if by magic, as he demonstrated to me.) Finally, he had then written each word three times.

With further questioning, I discovered that he had never tried to reword the definitions into his own words, had never tried to make connections between the words and their meanings and his life and prior knowledge, and hadn’t even thought about spelling patterns and the letters much less said them aloud, in chunks, as he wrote the words. He hadn’t tried to visualize the words or their meanings. He hadn’t tried to use them in context in speaking or in writing. Indeed, there was a lot he hadn’t done.

The RIGHT QUESTION about Study Habits

Let’s go back to my conversation with Faisal because my question was not the only problem.  Our talk revealed an obstacle that many of my adult ESL learners face: a lack of strategies and a lack of knowledge of how to implement them.

Since that time, I haven’t just been teaching the required material to my students.  I’ve also been having discussions with them about their study habits. For some, it’s a matter of being unmotivated.  But for many of my struggling students, a deficiency of learning strategies is their biggest stumbling block. My classes consist mainly of university-bound international students. To not share learning methods with them would be a huge disservice.

I had been sprinkling my lessons with various study techniques, taking care to frequently point out what they were and why we were using them, but it wasn’t until later that I discovered I had been totally blind to a crucial step. This was like teaching my students how to speak English by meowing.

Don’t get me wrong; I personally follow this step ALL THE TIME. Before, during, and after the lesson, on my drive home, in the shower in the morning, while eating lunch, etc. However, I had neglected to ensure that my students were reflecting. Again, I was assuming that they knew how to do something without verifying that they did.  It rather horrified me that I had been bypassing this vital part. But as I always remind myself, I don’t expect my students to be perfect. I expect them to improve.  So, I resolved that beginning the next day, I would improve. 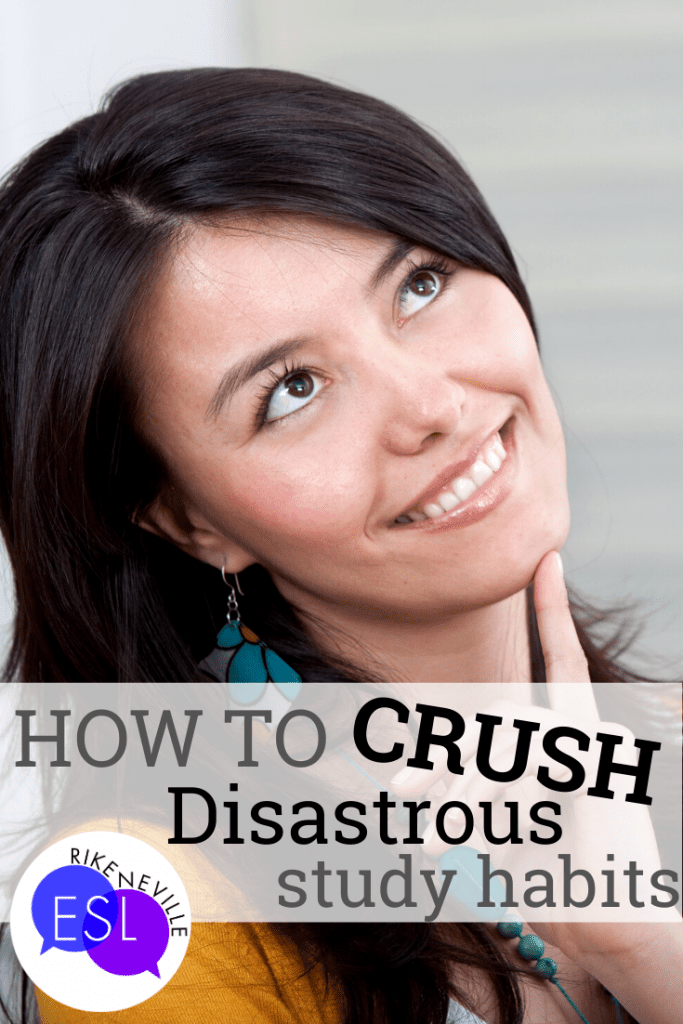 My students don’t know how to reflect!

Did I just hear that thought in your head?  One thing you can do is to give them a variety of study techniques and then model some self-reflection.  Here’s an example:

“Although I like the idea of writing the words over and over while spelling out loud, I have decided not to do that because I don’t want to focus mainly on spelling.  I’m pretty good at it already because I know how to recognize spelling patterns.  I hate writing sentences.  I think it’s a weakness of mine.  So, I think I should try using the vocabulary words in sentences with context clues.  This will be a big challenge for me, but I know that with practice, I will get better at it, and then I will be able to use the words in a real-life situation.”

Ask your students to think aloud or write down the thoughts that come as they decide which study habits they will try. Encourage them to explain why they choose one technique but not another.  Step to one side and announce that it’s now the next day.  Model aloud or in writing:

“Writing sentences with the vocabulary words was really difficult for me!  Although I thought I understood the meaning of all the words, I discovered that I didn’t really know most of them well enough to easily create a sentence.  I found myself looking up the words in different dictionaries to read different definitions and even googling for sentences with the words just to get some ideas.  I wasn’t able to finish learning all the words because I didn’t set aside enough time. It’s not as easy as I had thought it would be.  However, I am very confident in my ability to use the words I finished studying in writing and speaking.  I won’t forget them.  They’re now a part of my vocabulary.  I will study like this again, but next time I’ll schedule more time to do it.”

You can’t do it in one day.

Modeling reflections, both orally and in writing, is important as many students truly don’t have a clue how to even start.  I remember when I first learned how to knit.  My mother showed me how, and I caught on quickly and was knitting up a storm.  The next day, it was like I had a stranger’s fingers.  I couldn’t remember what to do, and my mother had to show me again. Likewise, expect that your students will need frequent reminders.  I haven’t knitted in years, and although I am sure I can knit, I’d have to get my mom to show me how to cast on (begin).

After I stopped asking my students, “Did you study?” and asked instead, “How did you study?” their overall progress improved.  Teaching them how to reflect and giving them a supportive environment for reflecting took them even further as students (and me as a teacher).

How will you incorporate reflection time for students to examine the success or failure of tried study techniques?

It’s the end of the term.  Are they begging for extra credit?  You’ll want to read this!

Previous Post: « Read Aloud in Adult ESL: 5 Powerful Reasons You Should
Next Post: How I Reclaimed my Time and My Life »